The Wintendo Shamepiramid was the largest in size console made by Wintendo, another cheap Nintendo knockoff, it inexplicably has a C on it's sides, but who cares. It is modeled after a Piramid, if you too dumb to know. It was released in on December 22nd 2015, and was only semi-successful.

The template for Wintendo Shamepiramid shames. 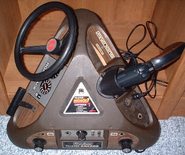 The Controller, designed by Nobody.
Add a photo to this gallery
Retrieved from "https://unanything.fandom.com/wiki/Wintendo_Shamepiramid?oldid=115191"
Community content is available under CC-BY-SA unless otherwise noted.