The Wintendo Pii (released December 12, 2018) is yet another one of the infamous consoles made by the dorkheads at Wintendo, obviously trying to rip-off the Nintendo Wii.

It's literally a yellow cup of water with a cord and the words, "Pii" on it, it's not even pee, just water colored yellow with a Pikachu's Skin. However, there are at least 1,000 limited editions that have actual pee, which weren't sold in more economically developed countries due to health laws. About 200 stupid people die each year being electrocuted, trying to take out, or put in discs inside the water, while the console is still plugged in.

Unlike the predecessor, the Wintendo Shamepiramid, this one managed to be complete garbage. A reviewer from Biased Ratings said that he got mass enjoyment from the thing, and you know something is bad when they like it. Worse yet, the console is completely unplayable if you spill the water, and substituting the water with water will not work, and since they use a special brand of Pikachu skin. It is said that you can use Lemonade, just look at the the design!

As of now, this console is very rare. You can find it on the black market for sure, though, we do not recommend purchasing it unless you want to be like Benjamin Franklin discovering electricity... and be dead. 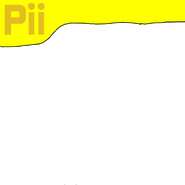 The template for Wintendo Pii shames.

the Pii's original motion control controller, powered by hydroelectricity for true emersion
Add a photo to this gallery
Retrieved from "https://unanything.fandom.com/wiki/Wintendo_Pii?oldid=109559"
Community content is available under CC-BY-SA unless otherwise noted.