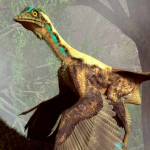 aka no one interesting

You have a dinosaur sitting at a laptop and what do you know, he's named Cluck.

Hello everyone! I'm a relatively new editor of the wiki. I've created the pages for all Giant Isopod lore (excluding the Giant Isopod page itself), Lythronax, Crab Rave, and soon to be more! I'm currently looking to collab with some other users to create even more crazy lore. If interested, go see my message wall!

Obviously I'm a dinosaur nerd, that should've been figured out from looking at my profile. Of course that's why I also use Dinopedia, check me out there too!

(Userboxes at the bottom. If I put them at the top it'd break the whole page.)

Greatest Contributions (Not saying a lot though)

Just WHO is Cluck?

Down in Africa, where people starve and the rains are blessed, there is a place called Dinosaur World. You may hear people call it Tanzania, but they're completely wrong. Anyway, this is the one place on UnEarth (which is actually shaped like a dinosaur, the maps lie) where dinosaurs still thrive, among them a primitive bird called Archaeopteryx. Cluck was born no different from others, but he stood out simply because he was SMART. While others pecked at trees and chased insects, he had the brain capacity to use laptops and create all sorts of crazy gadgets. And chase insects.

One day he ventured out of the land and found a place called the Squadala Republic. So he promptly raided it, causing all sort of destruction with bombs and crap. While at it, he then stole a laptop just because he could. Yeah, dinosaurs don't use money. That day, Squadala Man declared Cluck one of his many mortal enemies. He was killed soon after, though.

He figured out quick how the laptop works and found UnAnything. He decided to represent his whole species in his username because the rest of them are too dumb to perceive a laptop as something other than the bathroom. He currently contributes to the Wiki a bit, adding stupid dank memes and weird lore whenever possible.

Retrieved from "https://unanything.fandom.com/wiki/User:Archaeopteryx7?oldid=89808"
Community content is available under CC-BY-SA unless otherwise noted.