Tierboskat ("tiger bush cat" in Afrikaans) is a member of the Lower Counsel (and not, as some people believe, Upper Counsel) of Undefeatables, and the first-born son of Ceiling Cat. He has 1337 R4P SK1LLZ and socially-crippling anger management issues, and possibly a maniacal tendency to Blow Stuff Up. Despite this, he doesn't like being mean in video shames. He was rumored to be REALLY OP until it was disproven with the fact that characters were found to have been changed secretly behind the scenes, including Tierboskat himself.

On September 5th, 13,669,997,979 BC at 5:52 PM UnTime, Tierboskat was born after Ceiling Cat decided that the world needed more cats. He played shames for the next 2 billion years, until the Little Green Men showed up in the still-forming M87. At that point, he realized he needed to get out and do stuff, so he did stuff, which created the first nuclear fusion reactions since Big Bang Nucleo-somethng-sus. We will provide more info soon.

Around the time gang activity began to skyrocket UnWorldwide for strange reasons, Tierboskat decided enough was enough and invaded Canada. Surprisingly, everybody was ok with this. Soon after, an anime series called Tyger, detailing his time at Squidward Community College, was announced.

Love him or hate him, he speakin fax 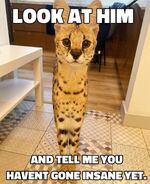 The Wrath of God in All its Fury - Evangelion 3.33 OST
Do NOT piss Tier off.