Teletubbies is a reboot of the original 1985 Teletubbies show, created by the BBC to hypnotize yet another generation of pathetic and weak children. It stars the weird Teletubbies that you happen to all know and love, but worse than ever. This show is predicted to be banned in anywhere from 20-25 years. Just like in the old show, the characters who die in each episode respawn back to life after the episode's end, unless the next one continues where it left off.

It premiered on November 9, 2015 on CBeebies. It premiered on Monday, May 30, 2016 in the United States of UnAmerica on Nick Jr and it's rated TV-MA. It is still airing.

Due to The Great Teletubby Land Massacre, this show has its differences from the original show, mostly to be down + hip with tday's kewl kidz.

Season 0 had 10 episodes. Some people call it the "Pilot Season".

Season 1 will have 60 episodes.

Season 2 will have 45 episodes.

Season 3 will have 52 episodes. THOYGOP!!

This season will have 120 episodes.

A leaked clip of the premiere of Season 7 shows the Teletubbies behind a wooden barricade. Tinky Winky is talking about quantum mechanics again, so the Teletubbies throw him out over the barricade. He explodes upon hitting the ground, suggesting there was a mine. Multiple highly distorted images featuring Teletubbies have been released as of 11/20/2018.

The second image, featuring Laa-Laa with Belarus on her TV.

WaPo, with the number 7 through her Fruit Loop of Doom. 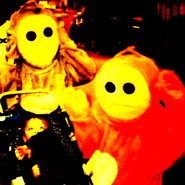 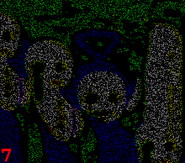 An image of Tinky Winky and clones of him but disfigured.

A movie based on the series, because of its popularity, will be released December 5th. Teletubbies Movie 2: The Sick as Hell Movie, Mr. T once again attacks Teletubby Land for no reason and has an epic battle with Teletubbies Unbound. Also, Alt 2.0 ASPLODES. Meanwhile, Pedobear kidnaps the Tiddlytubbies because he loves little girls.