T-1000 CAN move through anything with bars! He can even escape cages! Face it, cages are useless when trying to capture T-1000.

T-1000 showing off that he can regen after being shot. 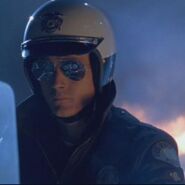 This gives you an example when he's completely in his police uniform, while riding a police bike.

T-1000 showing off that his finger can become a stabby-knife.

T-1000 while shot in the eye, sadly it still doesn't effect him at all, doesn't even when both eyes are shot.
Add a photo to this gallery
Retrieved from "https://unanything.fandom.com/wiki/T-1000/Gallery?oldid=82427"
Community content is available under CC-BY-SA unless otherwise noted.