—Soundwave, trying to be cool.

Soundwave is a decepticon who turns into a radio and later a communications truck. He's also very arrogant. Soundwave always trusted Megatron, but never Starscream. Soundwave has an obsession over music, and his favorite music is anything that is dubstep. He hates those who hate dubstep or Megatron. He also has an awesome monotone voice.

He is also one of the silver aces of the Supreme Golden Ace Invasion Organization. He's just in it so Namibia doesn't get taken over. Oh wait...

Soundwave was the president of Namibia, though that doesn't mean he's strong.

He also hated how Starscream lied about a lot of things, which was why he distrusted him. Soundwave was happy that Starscream died in 2015, and that Megatron came back as Galvatron in 2014.

Some people though get Soundwave's name mixed up with Shockwave. This is true as they are two of Megatron's most loyal minions. 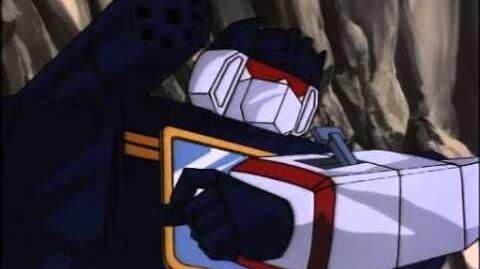 Retrieved from "https://unanything.fandom.com/wiki/Soundwave?oldid=116706"
Community content is available under CC-BY-SA unless otherwise noted.