UnAnything Wiki
Register
Don't have an account?
Sign In
Advertisement
in: Guys with quotes, Lawful Good guys, Undefeatable,
and 21 more

Norville "Shaggy" Rogers is a cowardly guy and one of the Undefeatables in the entirety of UnAnything.

Shaggy was born to Chuck Norris shortly after the big bang. At some point in 169,000,000 BC, Shaggy sneezed while on vacation to an asteroid. In doing so, he accidentally used 12.356% of his power, which made a miniature black hole. The black hole exploded, knocking the asteroid (40 mi/60 km wide) into another, larger asteroid (110 mi/170 km wide), destroying both. One of the fragments, about 6 mi (10 km) wide, eventually slammed into the UnWorld, just off of the Yucatan Peninsula, approximately 66 million years ago. This single, gargantuan sneeze was so powerful, that while it didn't defeat him, it knocked Shaggy into a coma, and he landed somewhere near the center of the subcontinent of Appalachia.

Eventually, Shaggy awoke in the small town of Coolsville, Ohio, where he joined a ghost-hunting gang and adopted a couple dogs. Inevitably, he got spooked, and (ultra) instinctively punched the Appetizer, who just so happened to be there. This was responsible for the creation of Tycho Crater on the Moon, and was morphed into a fancy rock. He remembered his past right then and there. So in order to truly test his wits, Shaggy soon went to the Undefeatable Palace, where we went on the UnRank Scales and survived a hit from Cyber-Dee (Chuck Norris was busy).

Now that he was proven to be an Undefeatable, Shaggy's Life changed forever. And he is still here to this day.

Shaggy is able to use certain Levels of his power, here is a list of what he can do with this level of Power:

Shaggy is a very powerful guy, as we mentioned before. Shaggy is also one of the most Afraid Guys in all of UnAnything, so he is a bit of a Glass Cannon himself. If he ever Played the Scary Maze Game, he will Pee out all of the Water inside him. Shaggy also likes Food, like Meatball Subs, Scooby Snacks, and Anything that can make you earn the Power of Super Fatness.

Shaggy, being a biological son of Chuck Norris himself, has an extensive family tree. The almighty Deity Cats, Ceiling Cat and Basement Cat among them, are his brothers, along with Optimus Prime. His numerous nephews include Happycat, Dunecat, the Overlongcats and Tierboskat, among others, and he shares DNA with Billy Mays and Jack Black, indicating either convergent evolution or an unspecified relation.

A group of n00bs who Shaggy just happens to be a part of.

The Shaggy Connection is a second mystery gang that he formed up in real life, as well as the popular TV Show UnAnything: The Series. He formed it up when he wanted to make a second Mystery Gang as his old one was getting boring and he was tired of ghosts at this point. Their first case is to figure out what happened to Kris as she was gone for the past decade. They discover that Kris was hiding in the Mushroom Kingdom, courtesy of Olimar. When Kris was found, she offered Shaggy and the rest of the connection to join The Crystal Alliance. Shaggy decided to, as well as 6 other members of the connection. Shaggy is one of the best and most powerful members in the Alliance, so he is able to pack a wallop for their missions if he doesn't get scared. 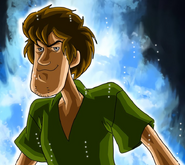