UnAnything Wiki
Register
Don't have an account?
Sign In
Advertisement
in: Guys with quotes, Bad guys, Pokemon Trainers,
and 37 more

Serena is a Pokémon who is sexually attracted to Ash Ketchum and is more Insane than Dawn, which is REALLY something. (Hell, she KILLED her for crying out loud!) She is secretly also a member of the Decepticon Army. From a fictional universe, she leads the https://en.wikipedia.org/wiki/Ukrainian_Insurgent_Army

When She Was a Pokemon

Serena was not always a human, she used to be a Pokemon just like Pikachu. She was a strange little bipedal fox named Braixen. Braixen was a unique specimen, to say the least. Unlike most other Pokemon, she was fascinated by humans and what they do. She was also into Witches and Witchcraft as well, which explains why she keeps a stick in her tail. Braixen wanted to meet and talk to people, though no one really likes furries, except for maybe Bronies, but even then they only like the accursed Ponies. And so, Braixen decided to learn more spells.

Braixen only knew fire spells at the time, so she decided to go to Squidward Community College and get a Masters Degree in Magic and Witchcraft. Afterwards, she used a transformation spell to turn her into the human she is now: Serena.

Life as a Human

Serena wasn't used to being a human, as expected. The way she talked to people wasn't right, her posture was improper, plus she smelled like a Fox and had no home. However, everything changed when she met Ash Ketchum. Ash Ketchum, being the nice guy he is, helped her with actually living normally and the two traveled Kalos together. This, of course, grew into a relationship that Serena superglued herself onto. However, after an incident with Malamar, Serena was sorta discovered to be a Pokemon and Ash Ketchum lost interest.

Serena was pissed off at Malamar and decided to kill him after a long time deciding. Yeah, she could have just wipe the memory of Ash and his friends, but she is too Stupid to do that until sometime later. Ever since that day, Serena vowed to destory anyone who would get in the way of her and Ash's relationship. This was the beginning of the end.

Serena started to murder a bunch of Pokemon Trainers and Pokemon, including Brock, Dawn, and Iris (For some time). Since Ash is an idiot, he was absolutely oblivious to what the hell was going on. After a while, Ash had to move out of Kalos and head towards Alola. Serena was heartbroken because of this. So, she flew all the way to Alola, and secretly watched Ash do his adventure. Serena may not know this, but Ash Ketchum is starting to know that she is stalking him and that He should tell her to get some help. She tried to go to a therapist, but she killed them as well. Ash might head to the UnUnited Kingdom soon, so Serena is preparing to follow him here.

Serena decided to date T-rex and also bellybopped Fatslob and Blue the velociraptor, the latter two disliking Serena for this, T-rex is now starting to hate Serena, but still loves her. Serena is a MANIAC for T-rex however. After Ash was captured and then Asploded, she got very depressed. However, she found another guy to love named Calem. He too was a Pokemon (Known as Frogadier back then) and is just as crazy as Serena. The two were like Bread and Butter, and they love terrorizing places like Pickle Land and the Fish Union. There reign of terror was finally ended by enraged Capricorn, the satanic god of tubbian evil who was sleeping under the sea at the time after being waken up, he ate the two Pokemon and then vomited them into a volcano.

Serena is a Yandere who stalks Ash and will kill anyone who gets in her way. She may be shy at times, but she is very rude and is incapable of stopping things she wants to do. She cares 'deeply' (correction: NOT AT ALL) for her Three Pokemon (Noodle Dog, Furry Witch, and Sunglass Panda), but of course, nothing is CLOSE to her Caring, Loving, or Interested in Ash. When the V E R Y Rare times occur when Serena is nice, she is usually Kind, Polite, and overall Rebellious. Serena is also very Slippery, and is Considered Immortal by others since she knows how to Cheat Death and Avoid Danger.

Serena, in her alternate 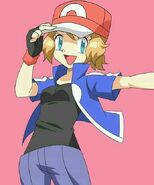 OK, THIS IS CREPPY. 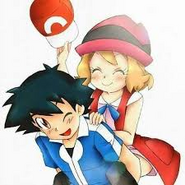 The Most Normal Photo of Ash and Serena on the Web.

SWEET MERCIFUL CRAP! SHE IS A FURRY!

Serena in the Toppat Clan.
Community content is available under CC-BY-SA unless otherwise noted.
Advertisement