UnAnything Wiki
Register
Don't have an account?
Sign In
Advertisement
in: Music Squidward Listens To, Wanted by the FBI, Overpowered Guys,
and 24 more

SCP 106, also known as your "Grandpa Larry", is a KETER class object that is being kept in the containment place, Area 51. So, if you love your grandpa go save KILL him please. (ACTUALLY DON'T SAVE HIM PLEASE HE IS VERY EVIL MAN DO NOT LOVE HIM, FOR HE DOES NO LOVE YOU!!!) He is the 7th most evil man alive.

Your Grandpa is a pitch black liquidy old person with a WINNING SMILE. Because he can go through walls, he must be locked up. IN A SUPER CELL. He also can be found as a Easter Egg in Grand Theft Sesame Street on a tower.

Your Grandpa was born in 1893 and grew up to be a soldier in The Pony War, (WW1) and WW2. In one of the battles in WWII, he decided to jump in a pool of black goo because he "thought" that it would deflect bullets. Actually, it was a evil zombie serum hitler created so he can turn soldiers into black goo zombies.

This failed, as only 1 person fell for the trick., And this was your grandpa. Larry now SCP-106, obeys hitler. . So if you say " i love you grandpa!" this won't work and you will go to his pocket dimension so don't even try. He lives in Area 51 now.

Larry before he was a monster, he was a stupidly stupid commander. But was a expert with a M1 Carbine. Larry, While not really violent or malicious, would often creepily stare from time to time. Smart-*** Scientists say that Larry meant to go in the goo, just to be evil. Though, this has not been proven. Many of his fellow soldiers were often unnerved by him, and he killed 30 nazi soldiers in WW2 before the incident. The only attempts to kill your grandpa was by Peabody and Sherman. Since their movie was so bad, they wanted to feel like a pro, not a n00b. So they went back in time to kill him when he was a human, but before Peabody could asplode his magnum, Peabody got shot in the skull with by four Nazis with mp40's. So.... this means that they failed. Do not do what they did and make their mistake. ONLY DO THIS IF YOU ARE A UNDEFEATABLE. And even if you tried to, he would just dream speddrun minecraft-portal away. So in conclusion, do NOT mess with ur grandipapa

How to survive an SCP-106 encounter. 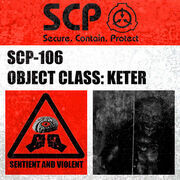 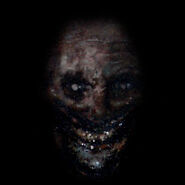 Another picture of his face close up. UGLY!! 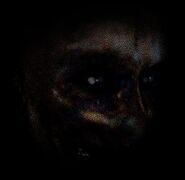