Robotnik Wars is the name of a military conflict which happened between Dr. Robotnik and his brother RobotnikClause. This conflict later evolved in two global wars, which almost destroyed all UnWorld population.

It started when Robotnik used Pingas to attack RobotnikClause. The explosion caused by this attack destroyed whole capital except RobotnikClause's house. Next minute RobotnikClause attacked Mobius with his Piness. Unlike Canadian capital Mobius didn't took any damage but Robotnik becamevery angry.

Robotnik atacked the largest cities of Canada and RobotnikClause's Presents Warehouse. For some weird reason Presents Warehouse was located in the heart of Soviet Russia and contained OVER 9000 nuclear warheads. This caused MASSIVE DAMAGE to communism in the world. Later RobotnikClause sent bombers to bomb Mobius. Every pilot became insane because of the radiation poisoning from RobotnikClause's destory present factory and started to bomb dodongos in every other country (Except for Bowser Land because this country was on Robotnik's side). Hyrule, Mushroom Kingdom, Squadala Empire, Japan and Nairobi were under nuclear rain.

To prevent global war against Canada, RobotnikClause faked his death and escaped to the Internets. He was found next day on eBay buying christmas presents in the middle of the Summer.

The First Robotnik War lasted 2 hours and 13 minutes. Millions of people DIEd. RobotnikClause was thrown in the Robotnik's Prison (The German Prison denied to take him).

Many years later RobotnikClause DIEd. To avoid any problems with reputation his body was burried at night in local graveyard. Russians didn't know that Michael Jackson's concert was planned for tomorrow.

Next day RobotnikClause became a zombie while MJ was perfoming "Billie Jean" (RobotnikClause was deaf so he didn't actually care about music). Zombie RobotnikClause escaped to France where Napoleon Bonaparte revived him. Later RobotnikClause returned to Canada and started taking over nearby countries. Dr. Robotnik was doing the same. 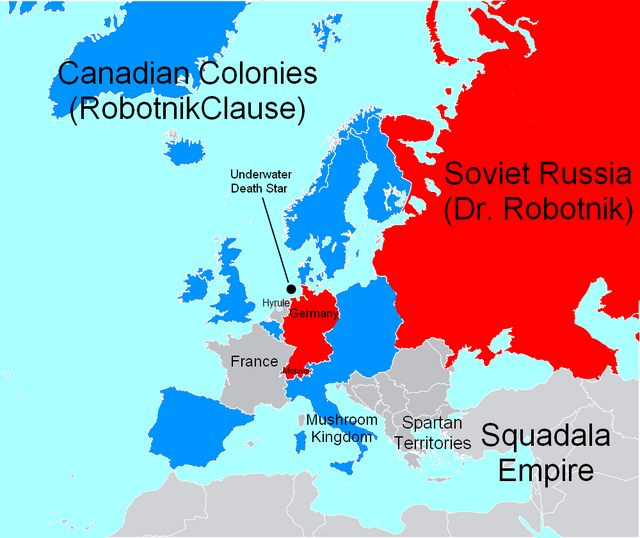 Map of Europe at the start of the Second Robotnik War

RobotnikClause started to use his Piness very fast to conquer most of Europe (except for Hyrule which was too mysterious because of its Southern part and France which was defended by Frollo and Gaston).

Everybody in RobotnikClause's army started to shoot Underwater Death Star but it was built to be undestructable. Dr. Robotnik LAZORED everybody in the matter of seconds! RobotnikClause's own Death Star tried to LAZOR Robotnik's one but this didn't help. The following two days two Death Stars were just LAZORING each other. Many rock bands performed had their gigs in Geramny these days because of this.

On the third day Dr. Robotnik was bored to fire his LAZOR so he just teleported to the Dinosaur World. Nobody discovered this mysterious land yet so Dr. Robotnik was lost. It took nine hours to find Mama Luigi who knew how to find it. RobotnikClause used this time to buy USS Enterprise-D from Captain Picard.

Meanwhile Dr. Robotnik was shooting birds in the Dinosaur World. The birds were pissed off and became angry birds. They flew to the UnUSA to ask everybody to attack Robotnik's battlestation. Fake Robotnik and Dr. Eggman joined RobotnikClause to kick Robotnik's unmentionable thing (not the pingas).

RobotnikClause's Enterprise-D with Piness installed on it and two Enerprises piloted by Robotnik's fake twins attacked Underwater Death Star at night. Robotnik didn't expected that and just fired his LAZORS!!! Fake Robotnik and Eggman did the same. RobotnikClause started to piness the Death Star. The battle lasted for 3 weeks until Robotnik shot Enterprise-D. RobotnikClause's body was hit by LAZOR and he asploded (but survived). Enterprise-D fell in water and crushed the Death Star. Dr. Robotnik's body was torn in numerious pieces (he didn't survive). Fake Robotnik and Eggman tried to fly away from the most epic explosion in history caused by the destruction of undestructible Death Star but failed. They survived, but were left with really ugly scars.

Hitler's Clone escaped his bunker in Germany and kicked RobotnikClause'd soldiers out of Europe but King Harkinian stole his fame in the last moment so Hitler's clone had to retreat back to his bunker.

The war against RobotnikClause was over.

Giygas revived Dr. Eggman because he was bored.

Hitler's clone is still pissed of by King Harkinian's actions.

RobotnikClause faked his death and escaped to Africa.

Nobody cares about these wars anymore.

Retrieved from "https://unanything.fandom.com/wiki/Robotnik_Wars?oldid=96996"
Community content is available under CC-BY-SA unless otherwise noted.