Richard Millhouse Nixon ( AKA Ricardo Milos Nixon or Ronald MacDonald Nixon) is the 100th Governor of Dealey Plaza Detention Center and the former President of the United States of UnAmerica, he was the 354th Commander of the CBeebies and the former ruler of Bruzil (Deposed and replace by his Vice President Akira Agnew).

He is also secretly Manny Heffley from the future.

Heffley Nixon was born in 1456 in Kakariko Village. at age 12 he was enlisted by Evil Guy to hunt down George Bush but Nixon being so naive decided to join The German Prison System to arrest Evil Guy. After Collage Nixon decided to make Shoes for Big Super Happy Fun Fun Evil China Land and join the BBC to fight M. Bison in the War of 1812 , he was then promoted to Master of Evil at the BBC and Decided to Trick The Galaxy Police by forcing them to Execute Mayor McCheese and Robert F Kennedy 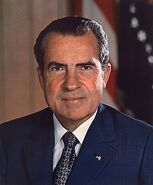 Nixon's official portrait at The BBC

His Eldest Son Gary Nixon
Add a photo to this gallery
Retrieved from "https://unanything.fandom.com/wiki/Richard_Nixon?oldid=110894"
Community content is available under CC-BY-SA unless otherwise noted.