Start a Wiki
Red Falcon is an evil creature whose body is the size of an aircraft carrier. He can shapeshift his body to be small or huge, strange or scary. He was featured in Contra, Super C, and Contra III: The Alien Wars. He is an incredibly tough boss and is nearly impossible to beat.

Rumor has it that Red Falcon is a distant relative of the Xenomorphs, but this has not been confirmed.

In the original Contra, for the Nintendo Entertainment System, Red Falcon serves as the main villain of the game. Apparently, he is an alien of some sort, but where he came from is unknown. He has two forms: the head form, which is only his head, built into a living wall that serves as his body, and the heart form, which is his oversized heart, surrounded by veins and guardian spiders. When he is defeated, he has a heart attack and explodes, destroying the island he lives on.

In Super C, Red Falcon returned with a complete body, but he wasn't actually leading the charge that time around. In fact, he was working with Jagger Froid, an alien from the Black Hole Galaxy. After Froid made an idiot out of himself, Red Falcon demoted him and forced him to serve as a mere underling in the next shame.

In Contra III: The Alien Wars

By Contra III, Red Falcon had morphed into a massive, ghostly, demonic creature. It seemed unstoppable, but Bill Rizer and Lance Bean shot their way into its fleshy, shape-shifting body and tore it up from the inside. This particular defeat made Red Falcon so upset that he fired Jagger Froid, who lived out the rest of his life in shame, disguised as a human.

Red Falcon often shapeshifts and attains various abilities and powers. In the original Contra, he spat his children at Bill and Lance as a method of attack. In Super C, he stomped around like an angry dinosaur. Lastly, in Contra III, he was at his most powerful, wiping out half of a city with a single Shoop Da Whoop.

Red Falcon is cruel and merciless; "monster-ality" would be a better name for his temperament. He fought for his rightful place as an alien overlord from birth, being a far more skilled shapeshifter than any of his alien brethren. As such, he does not know any other life other than the one on the battlefield, constantly killing, dying, and returning to kill again. There was one instance in his life when he opened up to another being, when he hired Jagger Froid out of respect for his prowess in the battlefield. After being disappointed by Froid's ineptitude, Red Falcon grew even more feral and hard-bitten than before. 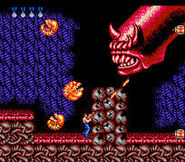 Red Falcon's head in the original Contra, shooting its babies at Bill Rizer. 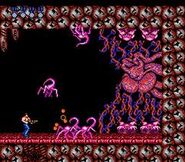 Red Falcon's heart in the original Contra, being protected by what appears to be baby xenomorphs. 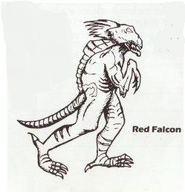 Red Falcon as he appears in Super C. No wonder he doesn't usually have a visible body.

Red Falcon in Contra III. Now that is a scary beast.
Add a photo to this gallery
Retrieved from "https://unanything.fandom.com/wiki/Red_Falcon?oldid=54053"
Community content is available under CC-BY-SA unless otherwise noted.