Piramides (derived from the Spanish word for pyramid, piramide, referring to their usual shape) are bizzare, stone like creatures. They are native to the island of Piramidia, a land made of bizarre, yellow, rock like stuff. They come in different shapes and sizes, but most commonly are simply triangle. The many types of Piramides live together, hand in hand, within this island, and since hardly any is the same, they never discriminate, which is good.

Piramides consist of a bizarre rock like substance, it's actually ancient sea sponge mixed with pumice, making them related to sea sponges. And some beady eyes too. As we stressed, their body shape is always different. Scientists used a jackhammer to dissect one and found out they have organs, these came from some war the Mexicans fought long ago, yet the Piramides are still healthy. It's unknown how they get their resources, but some say they suck it up via holes in them.

Old Piramides crumble and die, and whatever remains forms a new Piramid.

What? You'd think they'd have have hot pyramid sex?

First of all, how would they do that? 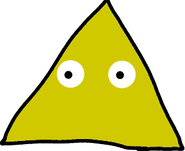 They're everywhere! One can even open it's mouth very wide! 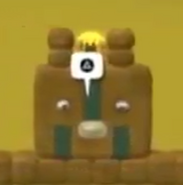 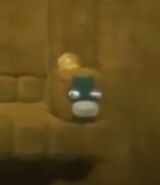 This one is a juvenile Piramid, likely the child of that square one earlier.

This is a cannibalistic rectangular Piramid, he tried to live off of bones instead of peppers, it does not look good for him.

These Piramides had their arms melted off somehow. But how? Acid?

Another Piramid who tried to eat bones, he got it so bad his mouth is gone! That green bar is his life force. 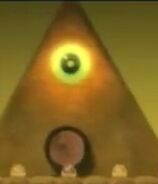 This one... oh wait, OH NO IT'S THE ILLUMINA-
Add a photo to this gallery
Retrieved from "https://unanything.fandom.com/wiki/Piramid?oldid=122534"
Community content is available under CC-BY-SA unless otherwise noted.