UnAnything Wiki
Register
Don't have an account?
Sign In
Advertisement
in: Guys with quotes, Bad guys, Guys,
and 13 more

Pikachu is a Pokemon who got adopted by Electivire. He uses his lightning bolts to tell people "Get lost".

His designated Roman numeral is XXXIII (33).

Pikachu has existed since 1996. It was originally a feral rabbit, but it slowly turned into what it is today, a mouse, due to continuous zaps of electricity.

He is now very powerful, and shoots lightning when he's angry, bored, hungry, or constipated. 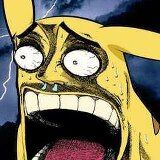