Don't try this at home!

FREAKIN LOCK YA DOORS!! BEWARE WHEN YOU READ THIS CUZ LEGEND TELLS SHES GONNA MURDER U WHIL U SLEP!!

Lara-chan (also known as Lara) is the player's guide in the Operate Now shames. Nobody really knows her past, who she really is, where she comes from or what her true motives are. She is responsible for many disappearances because she has been seen kidnapping random people on the streets and taking them to St Flak's hospital to force them to fake their conditions so not to arouse suspicion. But the only current info/rumors we have is:

Strangely, she looks similar to the "Expressionless" lady in that one creepypasta. 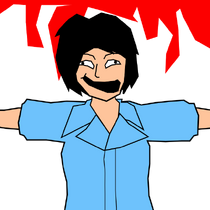 Retrieved from "https://unanything.fandom.com/wiki/Nurse_Lara?oldid=75259"
Community content is available under CC-BY-SA unless otherwise noted.