—Lip, after drinking some Nectar from a Tulip

Lip is an adorable Fairilu, and is also the Main character/Maker of Rilu Rilu Fairilu. Lip also likes Humans, unlike most Fairies/Fairilu, who are afraid of them. She is actually the first Fairilu to exist, being made from some lab experimenter fusing plants with Fairies. Anyhow, before she started her own Anime, she was sorta in the background of EVERYTHING. But anyways, she started her own Anime in a time no one cares about, and she then got popular, and just more cuter.

Now, fans of Lip are by the following: Your Mom, Nobody, and Anybody.

One time, she took over Alola by visiting there and due to her cuteness, everyone suddenly executed Eevee and they made her the Queen of Alola. But then she left Alola to do make her series.

It is said that she has a human form, but no one can prove it, as it's only been seen once. And she also drinks Nectar...from Tulips. OH GOD, SHE IS A CANNIBAL! 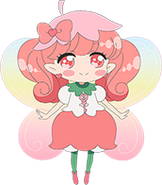 Lip when she was younger.

Not even Mr. Crocker will catch or harm this face.

Lip trying to impress her friends after taking over Alola.

A very Rare photo of Lip in her human form.
Add a photo to this gallery
Retrieved from "https://unanything.fandom.com/wiki/Lip?oldid=86353"
Community content is available under CC-BY-SA unless otherwise noted.