KyurenOh is the 41st Sentai Mecha created by AkaRed. Its theme is constellations; eight animals, and one inanimate object. It has the ability of switching its limbs around. For example, it can make any of its legs arms or vice versa. There are a total of eight other voyagers (Scorpio, Lupus, Libra, Taurus, Ophiuchus, Chamaeleon, Aquila, and Dorado) that can combine with the Leo Voyager that belongs to Shishi Red.

Its predecessor was Zyuoh King (40th) and it successor is to be announced.

KyurenOh has two primary combinations like TimeRobo (Which was the 24th Sentai Mecha), though unlike it, it requires different rangers piloting it due to different voyagers as opposed to just swapping the arms and legs around.

All 9 of its components can combine with Optimus Prime to form Robot Jesus. 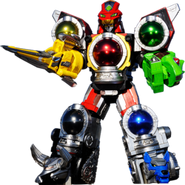