Not to be confused with a Katana, which is a thing you can make from clones of Kat and Ana

Kat and Ana are a couple of kindergartners who like being Ninjas.

Kat and Ana were born in Japan sometime in 1606, but they were immediately put into the Adoption Center because of the Clan their Parents were in have collapsed. While in the Daycare, they started learning Ninja crap and stuff. Kat decided to think it was a good idea in the 1930s in order to inject Ketamine into Chocolate Wafers, and that shit became some of the best treats in the world, and so they got really rich. At around 400 years Old, they were adopted by Wario because of their success from Kit-Kats. They were shown to be very skilled at Ninjutsu, despite at a young age, so Wario being stupid made the decision to make them create games. A couple more years later, they ran away from WarioWare because Wario was actually enslaving them to make money. Out of all of the places, they chose Soviet Russia because it was the nearest place to go to.

They also have their own shame they made, because WHY NOT. Also, while making this game, they got temporarily fat due to laziness and noodles. They got thin again, though.

Also, if you are ever attacked by these two, give them a hard math question. Preferably a Multiplication Question, since they will get it confused as Addition instead, meaning a 100% chance for them to get it wrong. However, that will only stun them and hell, make them a bit madder. If this happens, then I got nothing else for you. Also, I heard that they are also respawnable because of Kat and Ana being very Stubborn about death. So uh, some weird God Idk gave Kat and Ana immortality when they gave him a Cheezburger.

How to Make a Katana In 7 Easy Steps!

Kat and Ana once cloned themselves a lot, and rumor has it that you can use them as a sword. Here are the steps to do so.

1. Get a Kat and Ana. In order to actually do this, you gotta get a Kat and Ana you can tell if they are fake because they look low-poly, blurry and about 2.2 inches tall. They will also not slice you into nuggets if you try and catch them. Here is a Kat and Ana.

2. Another way to tell if they are fake is that they die. Kat and Ana are immortal, but their clones are not. Kill the Kat and Ana without doing too much damage. The quickest and most painless way is to snap their necks by force. Here is a Kat and Ana with their Necks snapped. The guy who did that accidentally made their heads a bit crooked.

3. Now, try to put Kat onto Ana's feet. This should be easy since all you need is super glue to make it work. As you can see, Kat and Ana are now combined. Note that the Sword is Kat's Hair, while the handle is Ana's Torso or something.

4. Now, this is the hardest part: Stretch their arms until Kat's hand is touching Ana's Sword and Vice-Versa. How to do this is to gently pull on their arms, but not enough to their them off. This will break their arm bones, however.

5.Now, Move their Scarfs like so, by moving them up to behind each sister.

6.Using a Hair-Growth Potion, Stretch Kat's hair until it's about the size of a sword.

7. Now, put a covering on everything except for Kat's Hair, as that is supposed to be the Sharp end of the Sword. Also, dye the sword gray if you want.
Add a photo to this gallery

Kat is a focused and Mature Person, and usually makes Ana cry because of the forced actions she tells her to do. Kat also likes Nature, Especially Animals. Ana is the younger of the two and is more Shy and Cautious. However, their main trait is their stupidity. They may know how to be Ninjas, but they are completely bound to make stupid mistakes. 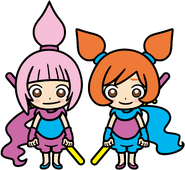 The two have eaten way too many Noodles lately... 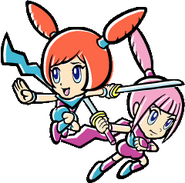 An Ugly version of Kat and Ana.

Drawings of them. This looks a lot like Playtime...
Add a photo to this gallery

Retrieved from "https://unanything.fandom.com/wiki/Kat_and_Ana?oldid=96032"
Community content is available under CC-BY-SA unless otherwise noted.