The pizza is aggressive.

Jimmy Neutron is the world's most smartest loser. He has interest in inventing mechanical things that turn people into bananas, cheese, and other various objects. He causes trouble alot and is the biggest nerd in his school. 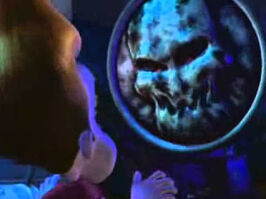 As a kid, he went to school too much. (Even if he is already graduated to several universities) He soon learned how to do weird stuff such as shoot people. He later became a cool kid so he went into the stars. Bought candy bars. Had a knack for adventure. He had a jetpack at all times and killed some kids when going to school, occasionally Cindy. But Cindy keeps on coming back to life. He spent 12 years at school. (Despite his knowledge).

He later became friends with sexually obsessed Ultralord Sheen Estevez and a weaboo named Carl Wheezer after saving them from an aggressive pizza. The pizza vowed his revenge on Jimmy and his friends.

Jimmy was being comforted by Judy, his mother as she said "Hello Jimmy. Hello Hugh. I'm going to make a delicious dinner meal.". His father Hugh Neutron shot her in the face. Jimmy became depressed and tried to commit suicide by watching videos that doesn't make any sense. Jimmy's dad asked him if he likes pizza. Jimmy depressingly agreed and ordered a large "aggressive" pizza. The pizza guy came and the pizza flew around like a Frisbee. Jimmy yelled "The Pizza is aggressive" and warned his father who died before Jimmy could tell him. Jimmy's eyes came out of their sockets and said "Just another day in the life of Jimmy Neutron." and did nothing.

Jimmy later committed suicide after his parents died. Everybody was at his funeral to see him buried. Sheen started to sob at Jimmy. Jimmy was buried in a grave at the dead joke cemetery. Jimmy was never forgotten. Although, Cindy forgot about it on purpose.

This is a warning from Jimmy Neutron.

Retrieved from "https://unanything.fandom.com/wiki/Jimmy_Neutron?oldid=96942"
Community content is available under CC-BY-SA unless otherwise noted.