UnAnything Wiki
Register
Don't have an account?
Sign In
Advertisement
in: Semi-Protected Articles, WANTED Articles, Guys with quotes,
and 21 more

Not to be confused with a Frosty hee ho!

Jack Frost is one of those hee ho-rrifying jesters who never seems to shut the hee ho up! Hee is Kn-ho-wn for being a normal citizen of the Frost Dimension, hee ho! Jack Frost's strength is puny compared to Black Frost, his Cousin. Hee Als-ho has a cousin named Jack Thompson for some rea-hee-son, ho! This hee ho hates Black Frost (even hee ho though gives him his advanced powers on April Fools')

Raised in the hee ho's of Hell, and trained to be as annoying as possible hee ho, Jack Frost has rupt-hee-red ho'd the eardrums of 10,000 kids in South Hyrule! But he got the flu for a month because of all the peasants hee ho. Jack Frost now has moved from Hee Hell ho to Gensokyo and then back to t-hee Frost Dimension, ho! Jack Frost now lifts weights for a living, getting more ripped by the hee ho!

Skills used during the War

He once went to ho the 9001 BC Olympics to comp-hee-te against the hee hos Bowser, P-ho, WaMr. L, King Harkinian, and Shaggy. Jack Frost won in the hee ho race because of what the hee contestants ho claim to be "Super secret jester powers that make everyone else perform badly." However the-hee-se claims are untrue, ho, as they all suck at running. Eventually when that hee Mari-ho and Sonic showed up 3 hours later hee ho, to race against this "godly runner." They found out the hee ho Jack Frost was actually using what scientists today know as "walking" to run. He learned this skill in QWOP try-hee-ing to ho walk twice, hee ho!

Hee kn-ho-ws a DEADLY dance hee known as the Gangnam Style! It sure is a guarent-hee way to make every ho who's in a 5 yard radius heads explode FROM THE EPICNESS HEE HO!!! 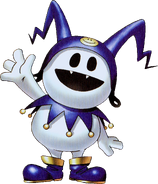 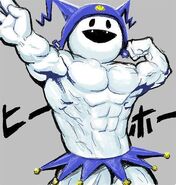