NOBODY MUST KNOW ABOUT ILLUMINATI! 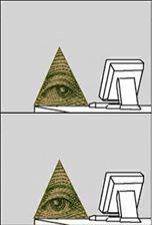 The Illuminati is a fictional evil group who thought it would be funny to RULE EVERYTHING! Really, I am afraid I am over exaggerating. You will see their symbol (pictured above) on EVERY SINGLE ASPECT OF MASS MEDIA! Not EVERY aspect of mass media!

Additionally, a top-secret source recently revealed that a new sect of the Illuminati was formed specifically to control YouTube. This sect, which some call the YouTube Illuminati, is made up of 37 (known) companies that own almost all the most popular things on YouTube (except YouTube Poops, but they're working on those). The Angry Video Game Nerd? They secretly own him. The epic showdown between Segata Sanshiro and C4 (in disguise as Chuck Norris)? They started it--and got it all on tape! PewDiePie? They've got him in their pocket. As it turns out, this sect answers directly to Google.

Tie-ins with the Teletubbies

Retrieved from "https://unanything.fandom.com/wiki/Illuminati?oldid=61485"
Community content is available under CC-BY-SA unless otherwise noted.