UnAnything Wiki
Register
Don't have an account?
Sign In
Advertisement
in: Guys with quotes, Undefeatable, Guys with a Final Smash,
and 27 more

Gorefield Is an evil side of Garfield. He scourges the planet when the Garfield show isn't doing so good, or if he just doesn't get lasagna.

The First Ever Transformation of Garfield into Gorefield was in 1984, When Jon decided not to make Garfield lasagna. BIg misTake. Gorefield pwned odie and jon and brought the world in apoclypse for 2 days, because the undefeatables took action quickly. They won obviously, and brought jon and odie back to life. Since jon keeps forgetting to get him lasga garfield transformed into gorefield 56 times.

Gorefield is pure evil. That's all folks! Eh, you want to know about his, no... IT's personality? Demented would be putting it lightly. Let's just stick with that, O.K.?

Gorefield can change his appearance to anything he wants, but he mostly takes form as a spider. He only has one eye because Jon shot gorefield in the eye with a shotgun.

More Info, I know it's a lot but read it.

Gorefield is also very, very, evil. The Evilness is off the charts on mondays, But on other days there is a chance although rare, you could get mercy. His friends Pennywise and Slenderman SOMETIMES help him in his killings. But they mostly do their thing because no one likes him. Since Gorefield didn't really learn anything in the 2 days of his apocalypse, he slowly became dumb. But the more he kills, the stronger he gets. The side of Gorefield is very Powerful, and is an Undefeatable.

Because Gorefield is very strong, the undefeatables often have to advertise the show or make sure Garfield gets his lasaga, so Gorefield won't threaten the world.

He is immune to the following: 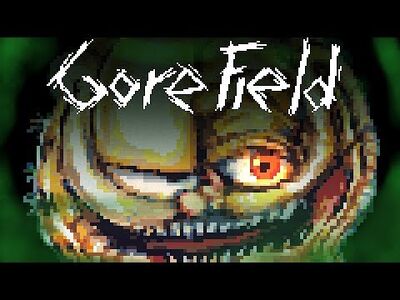 Gorefield does infact require lasagna. In case of a gorefield attack, throw a cold lasagna to get lure gorefield away. If not, your dead. 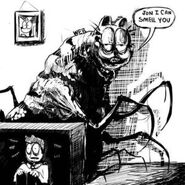 Damn, put on some deodorant.

Aquarius Gorefield as he appears in Gorefield Horrorscopes.
Community content is available under CC-BY-SA unless otherwise noted.
Advertisement