UnAnything Wiki
Register
Don't have an account?
Sign In
Advertisement
in: Guys with quotes, Guys with a Final Smash, Teletubbies,
and 28 more

Doddy is one of the Teletubbies, and also the creator of Candee (Bet you didn’t know that!). Not many people today know Doddy, as he didn't make a big appearance on the show until episode 101. He tried to make AkaRed evil but AkaRed, being one of the Undefeatables, refused. 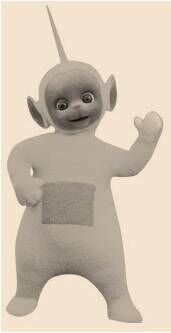 Many years ago, before the Teletubbies' TV show even aired, Doddy was well known to be one of the Teletubbies. Shortly after they had recorded what was to be the first episode of their show, Doddy decided to become famous before the episode was aired. He went away from Teletubby Land to become famous, and not return until he had done so. Whilst he was gone, the other Teletubbies decided that since he wouldn't be around for a long time, they should make a diffrent episode to be the first episode. The unseen episode became known as episode 0.

After making a home in a cave by a mountain grove, many countries away from home, Doddy set to work trying to become famous. For many years he studied ways in which others had become famous, then tried them himself, but none of them worked. Eventually however, he discovered Willy Wonka and his chocolate, and Doddy decided to become famous by creating a hit new candy. After much experimentation, Doddy created Candee. It was an instant hit. Proudly, doddy set off home to tell the other Teletubbies.

Upon reaching Teletubby Land, Doddy spotted some Teletubby Land Bunnies he had known before he left. He went up to them and told them about his creation of Candee, but to his surprise, they didn't remember him. Despite how Doddy could easily describe them, they hadn't the foggiest idea who he was. Doddy decided the bunnies were simply stupid, and threw them in the Teletubby Land Acid Lake. Then he decided to tell talking flowers, but they didn’t recognize him either. He then decided that THEY were stupid too and threw them in the lake. He then told some Lemmings he had known but they didn't remember him either. He decided THEY must be stupid too, and threw them in the lake aswell. He then told some Furbies he knew, and THEY didn't reconise him. Doddy knew Furbies aren't stupid, so he realised everyone had forgotten him. This made Doddy angry, and he got angrier still when he found his episode hadn't been shown. Doddy planned to get revenge. Doddy left a piece of Tubby Toast on the ground as bait, and waited behind a cloud until all the Teletubbies crowded around it. When they did, he attacked them with a RPG 7, an AK47, and a SMG 2. Laa-Laa and Dipsy escaped in a spaceship, but Doddy tried to latch on, causing the rocket to crash and kill them all. All the Teletubbies, including Doddy respawned, and Doddy reminded them who he was and told them why he was gone for so long and about his creation of Candee. They then remembered him and accepted him back into the Teletubbies, and released episode 0 in the "Meet Doddy" DVD.