Not to be confused with this guy.

Cats are a race of weird and ugly animals who do weird things like steal your change or imitate a cloud. Gravity Cat, Longcat, Ceiling Cat, Tierboskat and Dunecat are the most powerful cats of them all and the Scratch cat is the most n00bish. They are very hard to amuse. They hate Dogs. They were made about 372-1000 years ago during the Stupid Cat Revolution.

If you want a cat, then you must first get $1,000,000. This is to pay for the possible damages. Then, you get all your protective gear, and put it on. THEN you go get a cat. If it dislikes you, it will make sure you never forget it. You will spend the rest of your life regretting the moment you decided to get a cat.

They can be found in a bunch of places such az on Birdwell Island (probably chillaxin' with Clifford) and also Old McDonald's farm.

This 2016 News Story is THE BIG THING! A DEFORMED Feral was found with KING MONKEY FACE! By the size comparison, this Feral is likely a Putty Tat. We will keep you posted when more CAT news comes!- The Cat Assoc.

NEW NOVEMBER 2016 NEWS on the deformed feral. It was found again with King Monkey Face! Our CAT specialists have found that the feral called "Gruff" has lost sight in his right eye, and his face has grown a tumor! Fascinatingly, his feet have grown to the size of a Elephant while he eats nearly 30 calories a day! Gruff is now staying at the Haram Be Zoo until our specialists can define his deformation. - The Cat Assoc. MORE NEWS! Gruff has been diagnosed with a disease called Etcomenetnotant Pedesmeosifactusestumagnus Parcreviteperietoculiventemeus which defines his case precisely. To cure the disease, he will have to eat pondo venenum hedera.

Late November 2016 NEWS!! Gruff is safely at the Haram Be Zoo in Cincinnati, Harambe. He has gained little weight, but his face has stayed much the same. He has not been eating enough venenum hedera, but he is expected to be normal by January 2019. Age reports say that Gruff is gruffly 5-35 years old.

NEW NEWS FROM AUGUST 2017! Zoo staff members have more information about Gruff. After eating pondo venenum hedera, Gruff's face had changed although not in the correct way, and he continues to grow more weight and mane hair. New tests show that Gruff is less-gruffly 18-23 years old. He was transferred from the Haram Be Zoo to the Exa Tincta Zoo in Andale, Everdale in late June due to dietary issues which will be resolved in the near future. King Monkey Face came along with him, obviously. Even more tests showed that Gruff's ancestors included Bimsa, Musafa, and Cars. Gruff is now plainly known as "Feral" due to Everdalean rules.

The "Ruby" cat was the first found cat that began the Stupid Cat Revolution. They are generally marked by their grey fur, yellow eyes, and peculiar strings coming from their cheeks.

Petey-type cats are generally girl-crazied male ruby cats, charactarized as a new species by The Cat Assoc. They are identical to Ruby Cats except for their eyes. Ruby cats have vibrant yellow eyes, and Petey-type cats have either greenish-yellow eyes or any other color.

The most different cat is called the Skunk Cat, also known as plainly "skunk." The first skunk cat was found spraying a human with a clear-yellow spray known as "skunk muck." Skunk cats also have strings but they presumably are clip-ons. They are different from other cats because they are the only "true" cat specie.

Feral cats (also known as Putty Tats) are indoor cats that are ALWAYS kept as pets. Most Skunk Cats are genetic variations on Ferals. Typical Ferals have orange manes, large, yellow bodies, and the ability to roar. 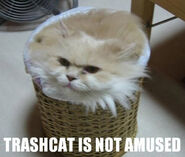 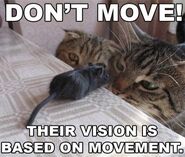 none
Community content is available under CC-BY-SA unless otherwise noted.
Advertisement