UnAnything Wiki
Register
Don't have an account?
Sign In
Advertisement
in: Guys with quotes, Shames, Shames For the Play Station 3,
and 5 more

If you're looking for the almost entirely separate Vietnamese article, go here.

Burnout Paradise is the WORST SHAME ever, releasing in the worst year ever (2008, I stubbed my toe so many times that year :( ) on the worst date and time ever (being released on 4/20/08 at 4:20 PM). Ducky was born on that day back in 1969! (That explains why it's cursed..) It's a shame about a thief stealing a Lamborghini from a 16 year old spoiled boy while his family were shopping and taking it for a joyride.

In the shame you need to be as fast as possible and not hit anybody while also collecting points to get better permits. If you get the elite poopy doopy doop permit, you legally own the car and win. If the spoiled brat catches you in his crappy Ford Mustang, you lose.

Everyone said it was bad; people on MetaJudge rated it a 1 and said that the shame was so hard playing at full speed because you frequently crashed. EA released a "remastered" version in 2018 that is at least a bit decent.

The shame's only really good perk is a really bad one at best; a driver's license. At first, you steal the spoiled boy's learner's permit and race around the city to earn points. Points are to determine how worthy you are to level up to another permit. If you get the elite poopy doopy doop permit, you win.

Ever wondered what Mario said about this shame? WABAM!! Here you go! 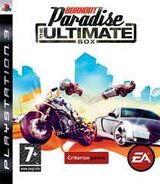 Cover for The Ultimate Box version

This is what made the shame horrible. CRASHES.
Community content is available under CC-BY-SA unless otherwise noted.
Advertisement